Dragon Ball Super Chapter 61 reveals a new upgrade for Moro, and now he’s stronger than ever.

Millions of years prior to even the original Dragon Ball series, the Grand Supreme Kai and South Supreme Kai united to take down Moro, a powerful wizard and energy-absorbing villain that posed a major threat to the universe. Grand Supreme Kai eventually defeated Moro, taking the villain into the custody of the Galactic Patrol. Moro remained in custody until the events of Dragon Ball Super. Shortly after his escape, the villain used the Namekian Dragon Balls to restore his original power and further boosted that by absorbing energy during a rampage across the universe. If that wasn’t enough, Dragon Ball Super Chapter 61 gives him another upgrade — and now he’s stronger than ever.

At the start of Dragon Ball Super Chapter 61, Moro faces off against Vegeta. At first, the villain has the advantage over the Saiyan Prince, and looks like he’ll win despite Vegeta’s latest power upgrade. This isn’t particularly surprising, as Moro was able to defeat Goku despite that Saiyan using the godly Ultra Instinct Sign transformation. However, things turn against Moro, as it’s revealed Vegeta learned a technique called Forced Spirit Fission on Planet Yardrat. This move separates Moro from all of the power he absorbed, and the villain eventually reverts back to his emaciated state from before when he used the Namekian Dragon Balls.

With Moro at his mercy, Vegeta gets permission from Jaco to finally put the powerful villain — who was previously unkillable — down for good. However, Moro has one more trick up his sleeve: Magic. The villain escapes back to his spaceship, where he kills Shimo-Rekka while Seven-Three watches on in horror. Still, Seven-Three — whose powerful copy ability allowed him to duplicate his master’s abilities during a battle with the Z-Fighters — doesn’t have to ruminate long on his ally’s death. Instead, Moro literally eats Seven-Three to absorb his powers. 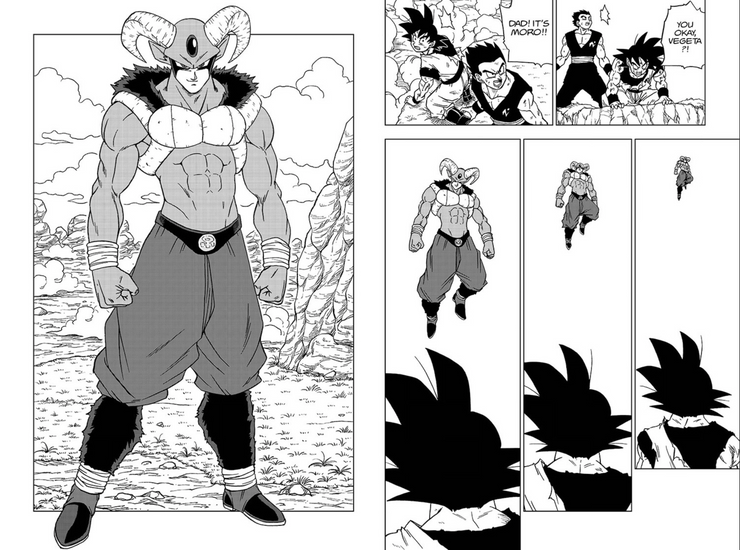 Vegeta, who pursues the villain, is shocked by what happens and ends up getting knocked out by Moro in his new form. As the Z-Fighters look on from Earth, Goku remarks Moro is now even stronger than he was before. When the villain does finally touch back down on Earth, Moro has a new form, which is something of a fusion between himself and Seven-Three. The villain then reveals Seven-Three held a complete back-up of Moro and his abilities. Plus, by absorbing Seven-Three, Moro now has access to that henchman’s copy ability.

Thanks to this turn of events, Moro is deadlier than ever. While Vegeta’s Forced Spirit Fission may still be able to sap the villain’s power in some way, the Saiyan Prince is seemingly down for the count, so it’s unlikely he’ll be able to compete with Moro in earnest anytime soon. This is also a particularly bleak outcome for the Z-Fighters. Prior to Vegeta’s return, the group seemed destined to lose to Moro. Nothing has changed for them, and now they’re even more hopelessly outclassed. Still, Goku is one fighter who, when faced with a challenge, always finds a way to break past his limits, so it may just be that he accesses a higher form of Ultra Instinct to take down Moro. It may also be that the Angel Merus finally gives into his instincts and interferes in the battle, despite the fact such an action will violate his vow of neutrality and cost him his life.

We regret to announce that orders from December 1st may not be in time for Christmas due to overloaded shipping. Dismiss